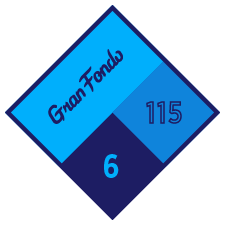 At this point, it’s looking like I’ll miss the end of the month by a few days, but my trip is mostly planned out. I’m going to be biking down to Providence using this route; I’ll also have to bike perhaps another 20 miles along the Providence bike trail once I get there. I’m trying to hustle up a friend to come with me, too.

I still need to buy some equipment:

I also need to do a few random tasks:

Did another mile run this morning in 6:52.

Funny how quickly the hedonic treadmill works. I was elated to break the 7 minute barrier 2 months ago, but now just another sub-7 minute run is “slow”.

As Scott Adams puts it, if you have a “goal-oriented” lifestyle, you spend almost all your life feeling like you’re underperforming. In this case, my next milestone is a 6:30 mile, so if I go out there thinking I want to do that, and end up going backwards in terms of performance, well…

Still, I feel pretty happy this morning. I think being below the 7 minute barrier is psychologically very helpful for me, since I feel like “at least I’m an objectively fit person, just having an off day.” Being at this level of fitness is new for me, and I’m still enjoying it. 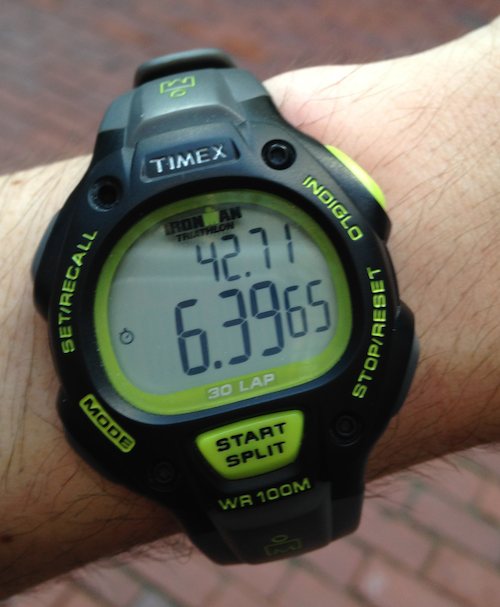 For whatever reason, my recent running workout regimen has been working out well, in terms of reducing my mile times. I thought I would document my running past, present, and future.

A bit of history

I’ve compiled the following graph of my run times, using runs of approximately 1, 2, and 3 miles (times are all minutes per mile): 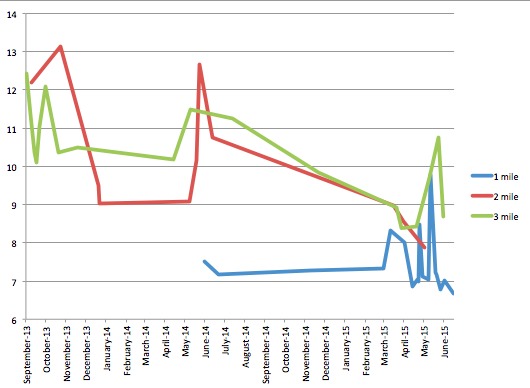 The main takeaway is that I haven’t improved much over this time period — although it’s a bit unclear, due to data problems. (I certainly improved my distances, which are not shown, but it’s not so clear about my times.)

A big problem with this data is that I don’t really have run times for these short distances around the times I was running intensively, to prep for my half-marathon and full marathon. Also, the observations we do have are sometimes instances where I got tired and had to pack my run in early — so they’re deceptively slow.

This underscores the importance of having some kind of standardized run to track one’s progress.

More recently, since I’ve been doing mile runs, I have standardized tracking, and it’s clear that I’m getting better. So it’s not necessarily clear that my new regimen is helping particularly — although it certainly feels like it is — but we do know that it is a regimen that works.

I generally run 1 mile on Mondays (say at a 6:45 pace), then do 2 miles at the track doing intervals (alternating quarter mile laps of running at a 6:00 pace and walking/slow jog). I also do a longer run later in the week, at this point around 4 miles. I’ve been throwing in stadiums in the last couple weeks, and I also try biking a bit if I need a fourth or fifth workout. (I often do four.)

Going forward, my goal has been to increase mileage by approximately 10% per week, to avoid injury (I feel like rest has helped me sustain a relatively good pace of improvement — this may also be key.)

So here are my recent mileage totals, counting stadiums as 3 miles (due to lots of injury potential):

June 22: 3 so far, will pick up another 3 on Friday due to stadiums + long bike on Sunday. Perhaps an additional easy mile run on Saturday. That will add up to 7, perhaps. 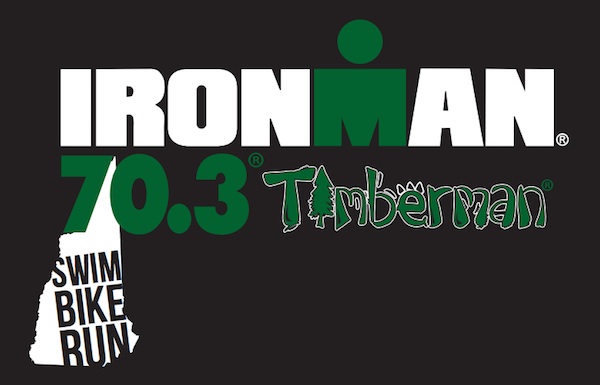 Since it’s looking like I won’t make Ironman Mt. Tremblant, my brother convinced me to switch my registration to a Half Ironman, the Ironman 70.3: Timberman race in New Hampshire. I’ll be able to drive to this race much more easily, and it’ll be a better match for my abilities.

The official Athlete Guide is here, and the schedule is here.

Then I have 3 hours left for the run. I’d actually have to run here… if I walk at a 15″/mile pace, I’ll only complete 12 miles, but I need to do 13.1. So I’ll have to do something like run the first hour at a 10 minute mile pace, get 6 miles under my belt that way, then spend the next two hours doing 8 more (with some room to spare since 6+8 = 14). I don’t particularly want to run, since I haven’t trained for this distance and there’s a decent chance of getting injured.

Over the next few days, I’ll try to get in the pool and on the bike to see how feasible they are.

Did another set of intervals at the track. I do two miles, running around a 6′ pace every other quarter mile. The gaps I take as easy as necessary. One question is whether to allow myself to walk — this probably lets me go harder on the intervals, but does mean an overall slower time.

I managed to improve my interval times this week, but took the “rest” sections slower, so my overall pace was much lower.

Run is on Strava.

Did my mile today in around 7 minutes. A bit off pace, but definitely stretched myself to my limit.

Interestingly, I thought I was doing quite well during the first half, but not really. On my PR, I did the first half in 3:19, while this time I did it in 3:24. I guess I was just feeling good?

The following chart shows my speed progress along my favorite 1 mile route. The y-axis is pace in minutes per mile, and it’s oriented so that up means lower minutes per mile (so faster pace). The x-axis just counts runs so far, so the actual distance between points doesn’t reflect the time between runs.

You can see there isn’t much of a trend in the raw data points. Indeed, my previous best time (on this course) was a 7 minute mile one month ago. But perhaps the moving average overlaid by Strava is a better, “filtered” indication of my underlying ability.

What were things that happened differently this time (not all may matter, of course?)

One thing that didn’t seem to matter, this time or the last PR I set, was having breakfast. I generally find that eating a lot the night before is important for good running, but I had a fairly empty stomach in this case. Maybe the mile distance doesn’t really require that much built up energy (glycogen?).

I’ve actually noticed a slight trend slower, and I wonder whether it’s due to cutting back my running/biking time to avoid injury. In any case, I’m happy to accept that because I’m going to build up my mileage soon enough.

After a week off due to illness, I’m ready to get back with exercising.

I just completed a 1mile run in 7:15. A bit slower than I’d like, but I felt tired and I think it was probably just a one-off poor performance.

I’m also going to look into getting treated for exercise-induced asthma. It looks like I have this.

My workouts for the last week have been available on Strava. I’ve taken the previous three days off on account of a case of food poisoning. Hopefully everything will back to normal soon, when I have more time available.